The missing rail bridge at Karnim (pictured) is one of the Missing Links that Michael Cramer documented in his 2015 report. There is still a way to Świnoujście Centrum (in Poland, but operated by German rail) by train from Berlin, but it today runs via Züssow, a much longer way around. I am going to follow the old railway line – using my bicycle and two short ferries at Karnim and Świnoujście before rejoining the railway network at Świnoujście Port, and will then head south to Szczecin. I remain unconvinced by plans to re-open the Karnim connection, but I am going to check it out.

Rather than head direct back to Berlin from Szczecin (that line enters Germany at Tantow) I will instead head west to Neubrandenburg, entering Germany at Grambow. This is a branch line, but one with reasonable regional cross border connections.

From Neubrandenburg I will then return to Berlin. 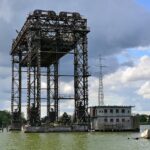