There are 2 main and 1 minor railway routes from Germany to Denmark – via Padborg (DK), or via the Fehmarn ferry. The latter is currently being rebuilt, so is not an option, and Padborg is well known. So hence the choice to cross the border here at the least known of the three borders – Niebüll – Tønder (DK) in western Jylland. All the lines in the area might only be diesel, but this is a border with good local trains. Schleswig-Holstein wants to electrify the line south of Niebüll, so there are prospects of some improvements here too.

From Bramming (DK) it’s faster trains to Odense (DK) and København (DK) and a lunchtime meeting with activists.

Then it will finally be time to be back on a premium daytime service – an afternoon X2000 from København to Stockholm (SE). The København Øresund bridge to Malmö (SE) is an example of a border with good long distance passenger trains, and excellent local trains. It is also the only viable way to cross from Denmark to Sweden, and a few good examples ought to be examined anyway! 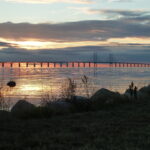