The night train from Oslo to Trondheim (NO) would normally connect well with the train to Storlien at the SE-NO border. But the day I need to take the train it’s a bus. And there is a further bus 20km further into Sweden, to Enafors. I can understand the problems here though, as works are ongoing to electrify the line from Trondheim to the border. So this is a border with passenger service, with the opportunity for service improvements in future.

Across Sweden has proven to be the biggest planning nightmare of all.

The current plan – as of 1 June, so less than 3 weeks ahead of travel, is to take the train from Enafors to Sundsvall Västra (a small station at the edge of Sundsvall), then take a rail replacement bus from there to Härnösand, and then a further train onwards to Umeå. This is a little better than an earlier plan that involved two very long bus trips across northern Sweden via Dorotea, but worse than the original plan that was to use a night train between Gävle and Gällivare for this section – but that train was completely cancelled rather than being diverted past engineering works – it looks like a poor decision to me, but there is nothing I can do about it. 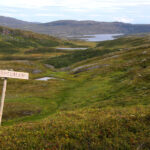