This should have been a nice day, arriving in northern Sweden on a night train. But it wasn’t to be. Track works meant all the night trains to the north are not running, and most of the daytime trains are cancelled too. So it’s a bus Umeå-Luleå, and then a train from there to to Haparanda (SE).

It is about 5km to cycle between Haparanda on the Swedish side of the border to Tornio-Itäinen on the Finnish side, passing the world’s most northerly IKEA.

The opportunity to run genuine through trains Sweden-Finland is very limited, as Finland uses 1520mm broad gauge and Sweden 1435mm standard gauge, but plans are afoot to at least make sure the trains start and end at the same station in 2023 – and tracks do run across the border already. On the Swedish side trains have only recently been extended again from Boden to Haparanda, so things are progressing here. This is a missing service because track exists, but there are no passenger trains, and there are plans to run them in future. 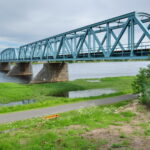