There is no land border here, although there is the vague idea to tunnel between Helsinki and Tallinn so as to connect Finland to Rail Baltica, something I will examine in discussions in both cities. The only way to do this part of the trip on land would be to route via Russia – and that is politically impossible, so was not considered. 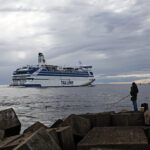