The best rail infrastructure to get from Riga to Lithuania would route via Jelgava (LV) and Šiauliai (LT), but there is currently no passenger service on the 80km of route between the two. The solution instead is to head south east first – passenger trains still serve Daugavpils (LV), and that is 30km by bike on quiet roads and tracks to Turmantas (LT) – and there are still trains from there to Vilnius. So this is a missing service – a border where track exists, but there are no passenger trains. I am not aware of any plans for better cross border rail here, except Rail Baltica (and that runs further west anyway) – that seems to be occupying all of the attention just now.

Having reached Turmantas by bicycle I will then take the train on to Vilnius and have time to meet activists there. 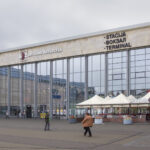