Borders in this region do not correspond neatly with where the railways are!

The best route from Pragersko (SI) on the mainline between Ljubljana to Maribor to Nagykanizsa (HU) routes right through Čakovec (HR) – that is a border with missing service, but I cannot get close enough to cross it. Instead of improving that route to Hungary, the Slovenes electrified and renovated the much longer route further north via Hodoš (SI) – thanks Nico Huurman for the comment about this! Meanwhile the Croatians do not really care about the route through Čakovec either, instead favouring the one further south through Koprivnica (HR) to Gyékényes (HU) instead! This is a border I will use – it has a very limited long distance service. It is also a Schengen external border.

It is that latter route that I am then taking – by train within Croatia from Varaždin (HR) to Koprivnica, then to Gyékényes. Then onwards in Hungary via Dombovar (HU), Baja (HU) and Kiskunfelegyhaza (HU) to Szeged. On the Hungarian side two further problems present themselves – the only rail bridge over the Danube south of Budapest (HU) is at Baja, and it has rather few trains! And the Hungarian railway network radiates out from the capital – regional lines do exist, but services on them are slow and irregular. If any of the trains here are delayed or do not run, I will always have the backup of routing via Budapest – longer but faster. 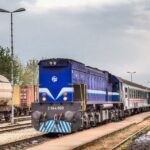