Thanks to new timetables in Greece, this day now covers more ground – either an InterCityExpress train from Athens to Thessaloniki, and then a regional train as far as Drama, and overnight there.

Theoretically going further eastwards by train from Drama would be possible… but instead it’ll be buses on Day 36. 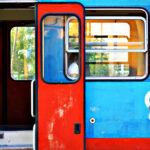