A day of two halves – a long and fast TGV from Paris to Pau, and then everything slows down.

Cross border rail between France and Spain is in a sorry state, and examining any of the 4 open and 1 closed crossing could have been interesting. But I can’t see and do everything. So Hendaye (FR)-Irún (ES) will have to do with the detailed examination in this blog post, and instead I will cross into Spain along a line where international trains have not run since 1970 – on the Pau to Canfranc route. Trains have run as far as Bedous (FR) since 2016, but the Bedous-Canfranc section is still out of action – there is a bus here. The extraordinary station building at Canfranc (shown, more on Wikipedia here) is I suspect the main reason for attention given to this line than any clear business rationale. This is a missing link that Cramer also investigated.

Part of the problem is also on the Spanish side – the broad gauge line there to Zaragoza via Huesca (ES) is slow and only 2 trains a day run as far as Canfranc. The timetables are also really impractical here – I do not need 4 hours in Canfranc, but there is no other option. 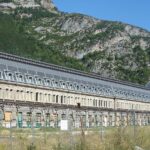