This one is so painful it had to be included. As I wrote in this piece for The New Statesman, Lisboa-Madrid is one of the most flown cross border flight routes, but the train connection is a catastrophe. At least before COVID there used to be a night train, but since then the trip takes all day, and normally involves changes in Entrocamento (PT), Badajoz (ES) and Merida (ES). The trip from Entroncamento to Badajoz involves 3 hours spent on a single carriage railbus that dates from the 1950s. At the moment this is a border with very poor local trains.

I had initially planned to change in Abrantes, rather than Entroncamento, but in the end I am now going to change in the latter. All explained here. 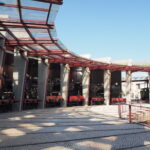