After an early start on the regional train from Marseille to Nice (FR), the first two border crossings are actually non-EU – the train traverses Monaco in a tunnel between Nice and Menton (FR). Then between Nice and Ventimiglia (IT) there is the first crossing into Italy. This is the route the long distance Thello service Marseille-Milano(IT) used to take, before the service was abolished – leaving this as a border with no long distance services at all, but with good local services.

From Ventimiglia it is onto a regional train northbound to Cuneo (IT) that nevertheless enters France again, passing through Breil-sur-Roya (FR) (there is a line to Nice here too) and Tende (FR), before re-entering Italy and arriving at Cuneo. The line is scenic but slow and through mountainous terrain. The borders here have limited local services.

From Cuneo it is on via Fossano (IT), Savona (IT) and Genova (IT) to Roma (IT) and falling into bed after a day of 7 trains and 5 border crossings! 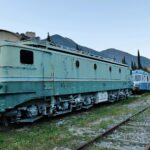