The route has 40 full travel days, split into three circuits, with a few days of rest time in Berlin in between each circuit. The whole trip starts in Brussels, and ends in Berlin.

As this is essentially a political project directed at the European Union, the focus has to be on internal borders within the European Union. Adding borders between EFTA countries – Norway, Switzerland and Liechtenstein – and the EU was simple from a planning perspective, so those were included. Each border will be crossed at least once – sometimes the nature of a border (Germany-Poland and France-Italy for example) allowed multiple crossings to be planned. Using every single operational cross border line was likewise beyond the scope of the project – it would take days to travel every cross border line between Czechia and Germany alone. So, simply put, each border will be crossed at least once, but not every single cross border rail line will be travelled.

Adding external rail borders of the EU – between Ireland and Northern Ireland for example, or Poland and Ukraine – also proved to be too complicated, and these deserve a trip of their own. The same can be said for the rail routes in the non-EU countries of the Western Balkans – covering all of the possible cross border routes here would have taken 9 days alone, and involved many bus trips. Here too a separate trip would make sense. 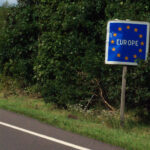 All other photos taken by Jon Worth, can be re-used under the same terms as the content on this blog.