In the summer of 2022 I crossed all of the internal borders of the European Union (and Switzerland, Norway and Liechtenstein) you can cross by train. That ended up with 95 borders crossed (you can find all the routes I took here).

But that is long way away from crossing all the cross border lines there are in the European Union – there are more than 350 lines listed in Annex 3 of this 2018 report for DG Regio of the European Commission.

So now I have set about mapping all the current and former cross border railway lines in Europe – using the borders of European countries as they are today. Of course many lines in Europe were built within one country, and then a border was moved, or even in some cases borders are today still disputed – while those stories might be interesting, they are not my concern here – my motivation is political and today, and hence concerns borders and railway lines as they are today.

I have also gone a lot further than in my original #CrossBorderRail project – I have included all European Union countries and Switzerland, Norway and Liechtenstein, and have added United Kingdom, San Marino, Vatican City, Monaco, Serbia, Montenegro, Bosnia & Herzegovina, North Macedonia, Kosovo, Albania, Turkey, Moldova and Ukraine. Borders between any of these are also included, but external borders (especially towards Belarus and Russia) are not included. The naming convention used in the map comes from the European Commission report – where the last station either side of each border is listed on the map. That – at the time of writing – adds up to 480 cross border lines mapped, and lines that cross a border multiple times are only listed once or twice (depending on the case and track layout).

The full zoomable map of all these borders can be found here.

The icons for each border indicate the type of line:

Inactive or abandoned line
No trains can run here. Either the tracks are in a state of disrepair, or have been removed altogether.

Track with no passenger trains
This is a legally operable railway, but either nothing at all runs here, or the line is freight only. Some lines in this category may never have had passenger trains, but there would be nothing legally preventing them being run (although it of course might not make sense).

The colours of the icons used are mostly for my purposes. Pink icons indicate borders crossed during the 2022 #CrossBorderRail project. Orange icons indicate borders I have crossed at other times. Grey icons indicate places I have not been. Lighter grey is used for narrow gauge lines, and tramways – that I have also not been to. The icons are divided into groups – and these can be toggled using the icon that looks like a barrel in the left menu on the zoomable map.

The map is going to be used to determine what places I should go next. The emphasis is going to be on heavy rail lines, rather than tramways and narrow gauge lines. And as already active lines offer the most potential, short term, I am likely to focus my visits on those. In the end all the icons ought to be orange and pink, but it might take a few years!

In the meantime do let me know if you spot any errors or omissions! 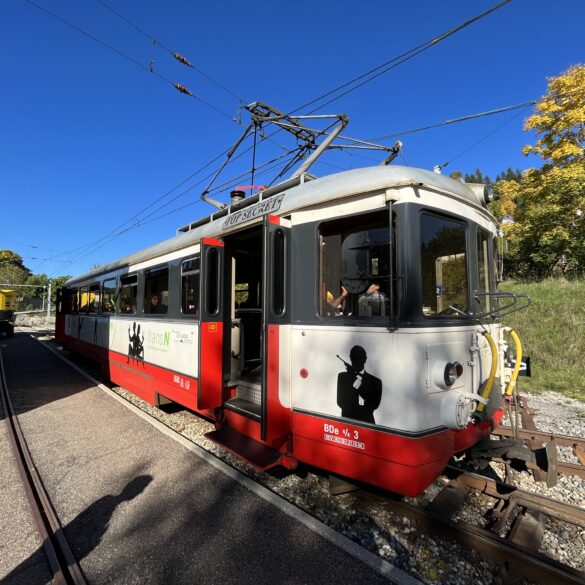